The Nursing School of the UANL (Autonomous University of Nuevo Leon) was founded in 1915 by Dr. Jesus Ma. Gonzalez.

In 1933, when the current University of Nuevo Leon was founded, the Nursing School happens to depend on the Medicine School continuing the vocational formation in Gonzalez Hospital, currently the Dr. Jose Eleuterio Gonzalez University Hospital.

In 1958 by management of Dr. Rodolfo Gonzalez Gonzalez and with the supervision of the State Governor, Dr. Ignacio Morones Prieto, the Nursing and Obstetrics School of the Autonomous University of Nuevo Leon received its own building which would function as home-school, being founded one more premise of the UANL.

In 1967 The Nursing School established an agreement with the Assistance and Public Health Ministry to form Nursing Specialists through one year courses with the purpose of answer the health demands of that time.

In 1975 the Bachelor in Basic Nursing Curriculum was modified and the Bachelor in Basic Nursing was reopened to respond the social and health demands from the state and the country. In the same year, it was created the Medical Technical High School with seven technical specialty areas in order to respond the demands of technical high schools, which functioned until 1979, year when it was given a new building establishing another premise of the UANL.

In 1976 the Nursing School, through the Public Health department, joins with leadership to the Guadalupe Health Program, with multi-disciplinary and inter-institutional focus, with the involvement of teachers and students from the Schools of Nursing, Medicine and Odontology in programs of primary care and extent of coverage in the first level of care, said program counted with financial support from the W.K. Kellogg Foundation.

Nursing Work in the community was consolidated with the start of the Nursing Development Program (1976-1980). It was characterized for focusing on the primary health care and for integrating the teaching and assistance. This program was financed by the W.K. Kellogg Foundation.

The vision of growth and the constant formation of the Nursing Bachelor by this School increased the academic offer, creating the postgraduate studies in 1979 with the aperture of the specialization studies in the areas of: critical care, pediatrics, mental health and psychiatric, being founded the first nursing postgraduate program of the country.

In 1980 the school’s student population increased considerably so the building was insufficient and less functional. The School’s Management directed the construction of a new building for the School. In 1982, the University’s Rector delivered and inaugurated a new building which counted with 18 classrooms, 4 laboratories and one auditorium.

In 1990-1992 it was introduced the Nursing Development and Innovation Program of an educational nature in its essence. It was built on the base of community work developed by the Nursing School. Through this program it was possible to define with more clarity the methodology of the work of nursing in the first level of care. It developed at the same time a system of electronic information which eased the decision-making in service, improved the teaching of the under and postgraduate of nursing, opened fields of investigation and allowed to materialize the contributions of the profession to the Health State and the population. Its development was financed by the W.K. Kellogg Foundation.

The Long Distance Education Programs were initiated in 1997 with the support of the W.K. Kellogg Foundation. The first of them was carried out in coordination with the Nursing School of the University of Colima, which is currently offered to general nurses with pre-university studies who wish to obtain a Bachelor’s Degree. In 1998, it started the offer of the Program of Master’s Degree in Nursing Sciences in the semi-distance modality to a local and national level.

In 1999 the Basic Nursing Major is closed and the Bachelor’s Degree Curriculum is modified, being offered in a Double Cycle. The first cycle that was taken in two years and formed the Associated Professional in Nursing, and the second cycle was taken in two more years and the students graduated with a Bachelor’s Degree in Nursing. This program was updated in 2001, including the General University Formation Studies.

In 2001 the School’s work was concentrated, among others, in the processes of evaluation and certification of the study programs and with the aperture of innovative programs as it was the Educational Program of Associated Professionals in Podiatry, and the Doctor’s Degree in Nursing Sciences which started in 2003, the first in its genre in Mexico and Latin America in Spanish speaking countries. The conformation of Academic Groups was initiated and registered in the Public Education Secretary (SEP) and in the Program of Teaching Improvement (PROMEP).

In 2002 the consolidation of the Nursing School’s Honor Society was achieved as part the Chapter of the International Sigma Theta Tau Nursing’s Honor Society.

In 2006 the School’s Academic and Administrative Processes were approved, certified by the International Regulation ISO 9001-2000 according to the quality standards for university institutions. The Program of Master’s Degree in Nursing Sciences was evaluated by SEP/CONACYT and was incorporated as an special program to the PIFOP/CONACYT.

2008-2012 For the first time, 10 professors of the Nursing School were recognized by the National System of Researchers (SNI). Two professors are responsible of the presidency of the COMACE (Mexican Council for Nursing Certification) and of the FEMAFEE (Mexican Federation of Associations of Nursing Schools). The 100% of the PTC have postgraduate studies, 33 PTC have PROMEP Profile (87%)

During period, they wanted to re-direct the Nursing Bachelor’s Degree Curriculum to the use of technologies of information and communication, which was sustained by pedagogical theories focused in learning and based in the development of competences according to the Academic and Educational Model of the UANL.

The re-certification of the Nursing Bachelor’s Degree Curriculum was obtained with validity of 2009-2015. The academic and administrative processes were re-certificated in a consecutive way with the International Regulation ISO 9001-2000 in 2009 and 2012

The CIEES (Inter-institutional Committees for the Evaluation of Higher Education) evaluated at level 1 the Program of Associated Professional in Podiatry in 2009 and the Curriculum for Nursing mixed modality Bachelor’s Degree in 2011.

The Academic Groups of Prevention of Addictions and the Academic Groups of Human Responses to Health and Sickness have advanced in this period to a “In Consolidation” level and the Health Administration and Management Groups have kept in formation level. The foreign financing for research projects has been achieved thanks to the support of CICAD/ OEA, PAICYT, CONACYT, PROMEP, QUELLOGG, CENSIDA and THE SOUTHWEST FOUNDATION FOR BIOMEDIC RESEARCH, SAN ANTONIO, TEXAS, U.S.A.

The Programs of Master and Doctor’s Degree in Nursing Sciences are recognized and registered in the National Register of Quality Postgraduate (PNPC). In 2011 both programs are developed considering the lineaments of the Educational Model and the Postgraduate Academic Model of the UANL, approved by the Honorable University Council in the same year.

The Educational Programs of Bachelor’s Degree in Mixed and Educative Modality Nursing were redesigned and adjusted to the Educational and Academic Model of the UANL, approved by the Honorable University Council on August of 2011. 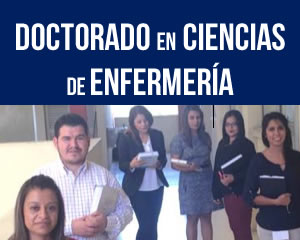